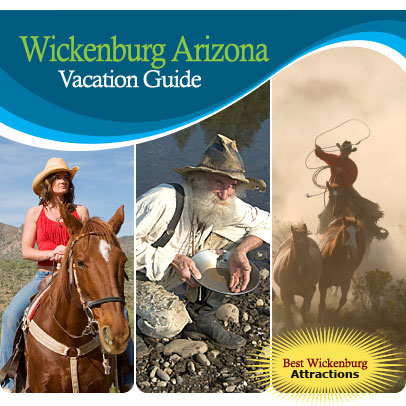 Like so many Arizona towns like it, the rich mining history of Wickenburg, Arizona is a testament to the hardy resolve of the gold rush dreamers who flocked to the area in the 1800s, searching for their share of the greatest riches ever known. What set Wickenburg apart however from other early Arizona mining camps is its location near the lush and fertile Hassayampa River, giving the region a storied reputation both as a gold mine mecca and agricultural promise land. Today this small but mighty community in the foothills north of Phoenix is a quaint reminder of the desert's rich past, charming visitors with western flair and a taste of days gone by.

Wickenburg is located just 54 miles northwest of downtown Phoenix, along US Highway 60, making a perfect day trip from the Greater Phoenix and Scottsdale area. Many of the sights are preservations of the town's prosperous mining days while others are modern destinations that offer something for every member of the family.

Things To Do In Wickenburg

Del E. Webb Center for the Performing Arts - a 600 seat entertainment venue, the Webb Center hosts talented artists from around the region and the world, including perennial western favorites The Sons of the Pioneers as well as more modern classics such as Chuck Mangione and the Duke Ellington Orchestra. A true collaboration between the arts and education, the Webb Center is located on the campus of Wickenburg High School and offers year round exposure to world class theater, dance troupes, musicians and orchestras.

Vulture Mine - the original mining stake established by town founder Henry Wickenburg, the Vulture Mine produced over $30 million dollars of gold ore during its active mining days. Visitors today can take a self-guided tour of the mining camp's remnants and see first hand what it was like to be part of the true wild west.

Old 761 Santa Fe Steam Locomotive - during Wickenburg's heyday, train travel boomed along with the countless saloons, gambling halls and businesses that supported the miners. For several years in the 1860s and 70s, it seemed everyone headed west stopped in Wickenburg. This brought the Santa Fe Railroad to the town's doorstep, opening up new opportunities for the thrill seekers and adventurers who rode the rails westward. This original Santa Fe Steam Locomotive remains as a reminder of the great contributions the railroad played in the establishment and prosperity of Wickenburg, and during the height of the gold rush traveled weekly between Chicago and the west. Located directly behind Town Hall, the Old 761 is on display daily.

Frontier Street - visitors looking for the authentic west can find it on Frontier Street. Boasting many of the original buildings from the town's early days, Frontier Street is also home to the original Santa Fe Depot and several western themed shops. Stop by the Chamber of Commerce offices housed in the Depot and pick up a brochure for the Historic Walking Tour. Look at the shiny numbered copper disks on the outsides of buildings for information on the exciting past of this historic area.

Desert Caballeros Western Museum - often called Arizona's Most Western Museum, this small but powerful museum is home to one of the most extensive collections of western artifacts, memorabilia and works of art depicting the American cowboy, with special emphasis on the contributions of the region's native peoples.

The Nature Conservancy and the Hassayampa River Preserve - farming and ranching success was almost as rich as the mining claims in early Wickenburg, due in large part to the lush and fertile valley of the Hassayampa River. Early American people cultivated plentiful crops and thrived in the area deep with wild game. Later, when the ranchers and farmers moved in, the agricultural legacy of the Hassayampa continued and today the Nature Conservancy seeks to preserve one of Arizona's last remaining riparian habitats. Because of the crystal-clear waters that flow year round, the Hassayampa Preserve provides a natural home to an amazing collection of wildlife that thrives in the fertile valley. The marshy riverbanks offer breathtaking views of the river's course against the backdrop of the foothills, making the perfect spot for a picnic or bird watching afternoon.

Jail Tree - legend has it that this 200 year old mesquite tree once served as the town jail. Found at the corner of Tegner and Wickenburg Way, see for yourself if this local lore could be true, or is another example of Hassayamping, a Wickenburg word for telling tall tales.

Wickenburg is home to some of the best outdoor recreation in the state of Arizona. Whether your preferred method of seeing the outback is a four wheeled drive jeep, motorcycle or mountain bike, Wickenburg is the place to stop. You can take a guided Jeep Tour, stop by one of the many stables and go horseback riding, or hit the trails on your mountain bike or off-road cycle. For those looking to try the outback west for the first time, rentals are also available at reasonable rates. And of course there are beautiful award-winning golf courses. The Visitor's Center at the Santa Fe Depot should be your first stop for maps and trail guides.

For the slightly more adventuresome, why not try a hot air balloon ride over the spectacular colors of the desert landscape or take a scenic helicopter ride? The truly western aficionado will appreciate the numerous dude ranches, guest ranches and working cattle ranches in the area for that authentic look at life in the American west. In fact, Wickenburg AZ is known as the "Dude Ranch Capital of Arizona".

Whether young or old, adventuresome or simply interested in the storied past of one of Arizona's great western towns, Wickenburg is the place to be. The year round temperatures are considerably milder than the warmer Phoenix area and the town's backdrop against the foothills makes for pleasant winters as well.

Getting to Wickenburg AZ

From the Phoenix area, head west on US Highway 60. Exit at Tegner Avenue/US 93 and turn right into downtown Wickenburg. The distance is about 54 miles from downtown Phoenix.