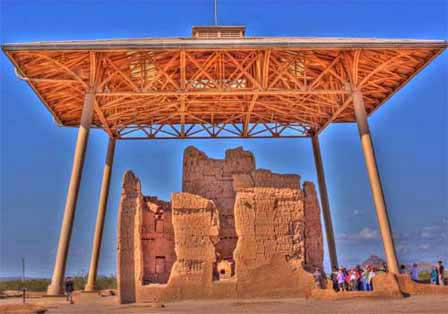 Built By The Hohokam Indians Over 1000 Years Ago

Imagine a swift and efficient movement of water through the dry, arid desert of southwestern Arizona. Imagine how an innovatively engineered system of canals and channels could aid the production of crops, enable new communities to grow and flourish, and bring much needed relief to a drought-ridden people.

Sound like a plan for developing Arizona into an oasis of modern proportions? Think again. The oasis just described is not the Arizona of today, or even tomorrow, but rather over 1,000 years ago. The Hohokam people of southern Arizona were farmers first and foremost, but found the parched earth frustrating, especially considering the close proximity to both the Gila and Santa Cruz rivers.

In an amazing display of innovation they developed a series of canals to move water from the rivers over several miles to their small villages. Their farms flourished. They were able to expand their small pithouses into more substantial buildings.

Their population grew. For many years up through the 14th century the Hohokam settlement was one of the most sophisticated communities in the American southwest. Today all that remains of the Hohokam are ruins of their once-great architecture and engineering, the most prominent of which is available for all to see at Casa Grande Ruins National Monument.

Early Preservation of the Ruins

Casa Grande Ruins National Monument is the first archaeological site to be preserved by the United States government, and is the fifth oldest location in the National Park Service. Located in south-central Arizona in Coolidge Arizona which is midway between Phoenix and Tucson, the Casa Grande Ruins was first established as a national reserve in 1892, and then later a national monument. While other examples of Hohokam culture can be found, most notably at the Pueblo Grande Museum located in and owned by the City of Phoenix, Casa Grande Ruins remains one of the most spectacular federal park sites dedicated to the preservation and enhancement of early southwestern culture.

The most impressive structure at Casa Grande Ruins is the four-story building known as The Big House. A massive 2,400 square feet, the building has walls over three feet thick. Visitors can explore the exterior of the ruin, and can see inside to what remains of stairways and windows. Wooden support beams are also visible, emphasizing the architectural skill of the early Hohokam people. The Big House is much larger than other ruins discovered in the area and because of its topographical orientation toward the four points of the compass, it is believed to be some kind of observatory. This further suggests the Hohokam were advanced engineers and scientists. Placement of certain doors and windows to capture the rising and setting of the sun and moon continues to amaze visitors today.

While the primary attraction at Casa Grande Ruins remains The Big House, visitors to the Monument should make a point to stop at the Visitor Center at the entrance to the ruins. Home to the museum, bookstore and gift shop, the Visitor Center is an excellent source of historic information about the Hohokam, other Arizona ruins and even offers a fifteen minute video highlighting the wonders of the Casa Grande Ruins and surrounding areas.

Getting to Casa Grande Ruins

From the Tucson area take I-10 west approximately 47 miles to AZ-87 at exit 211b. Continue straight onto the Frontage Road for ï¿½ mile. Stay in the right lane to go North on AZ-87 for 22 miles through Coolidge. The entrance to the monument will be on your left.

From Phoenix Take I-10 east approximately 36 miles to AZ-387 at Exit 185. Turn left at the end of the off-ramp onto AZ 187/AZ-387. Go over the I-10 overpass and then make a right turn onto AZ-387. Proceed east 7 miles to AZ-87. At the stop sign, make a right turn onto AZ-87. Once you arrive in Coolidge, turn right onto Arizona Boulevard. The monument entrance will be on your right.

The Casa Grande Ruins are daily from 9:00 AM to 5:00 PM everyday except Thanksgiving Day and Christmas Day. Entrance fees are $5.00 per person and are valid of seven days. Children 15 years of age or younger are admitted free and special waivers can be requested for school groups. A picnic area is located across the parking lot from the visitor center which has shaded tables and a raised platform to view an ancient ball court. All areas are accessible by paved or hard-packed dirt paths. Leashed pets are welcome. Please allow one to two hours for your visit. This is desert country. Summer daytime temperatures may exceed 100 degrees. Winter temperatures range from the 60's to the 80's. Spring and fall are warm and dry, with highs in the 80's and 90's. During summer months, be prepared for hot temperatures. Protective clothing, hats, sunscreen and personal water containers are highly recommended.