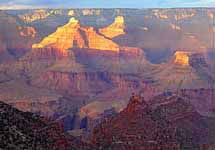 One look into the chasm that is the Grand Canyon and you’ll understand why it is one of the Seven Wonders of the Natural World. If you’re planning a Grand Canyon vacation, learn a little about its history so that you can soak in the vision before you go with an understanding and appreciation of the powers and people who shaped this amazing land.

How the Grand Canyon was Formed

Are you wondering how the Grand Canyon was formed? One word: erosion. When hiking along one of the canyon’s rims, look down and try to spot the tiny ribbon below. That’s the Colorado River. This river has wound its way through the various layers you see on the canyon’s walls for millions of years carving a gorge of epic proportions. Water and wind erode rock and sweep it away. It’s hard to imagine that the river was once on top.

The layers of the Grand Canyon are a spectacular feature that reveals various time periods and conditions. Sediments left behind reflect the conditions (muddy, rocky, sandy, volcanic, etc) of certain time periods. The river has cut through the earth which allows us to see the passing of eons before our eyes.

People of the Grand Canyon

The Grand Canyon has been home to Native Americans for thousands of years. About 10,000 years ago, paleo-hunters were known to have hunted big game throughout the area. More recently, hunter-gathers lived in the area until about 1000 BC. Archaeological findings, such as pottery found in the canyon, have been carbon dated to 4000 years ago.

The park contains nearly 2,000 ancestral Puebloan sites including the impressive Tusayan Pueblo which was built in 1185 AD. By the late 1200s, the early Grand Canyon Native Americans abandoned their homes. Some speculate that an extended drought prompted this mass exodus.

In the 1300s, the Cerbat (ancestors of today’s Havasupai and Hualapai Tribes) people moved in along with the Southern Paiutes. A century later would see the Navajo and the Dine (relatives of the Apache) people settling in and around the canyon. Today, the Navajo’s reservation is located along the eastern section of the Grand Canyon.

In the mid 1800s, an army survey party explored the region led by Lieutenant Joseph Ives. Ives came to the conclusion that the area was “altogether valueless” and a “profitless locality.”

John Wesley Powell became one of the first to raft the Grand Canyon in 1869. He and his party of nine traveled 1,000 miles through the Grand Canyon on wooden boats. Three men were lost during this dangerous expedition through rapids and overwhelming heat. A second journey in 1871 provided a wealth of information about this unexplored part of the U.S. Powell is also known for founding the U.S. Geological Society. Lake Powell is named after John Wesley Powell.

“The Mountain Lying Down” was a term once used by the Paiutes to describe the area. John Wesley Powell later began using and publishing the term “Grand Canyon” in the 1870s and the name has stuck.

The 1870s and 1880s yielded the discovery of lead, zinc, asbestos, and copper which prompted many to stake mining claims. However, actually mining the canyon proved difficult and treacherous. Instead of getting dollars through mining, many miners turned to a more profitable venture: tourism. Buildings, railroads, lodging, and new trails along with fabulous photos and paintings depicting the canyon and eventual National Park status in 1919, beckoned tourists from all over the world with promises of a sight unlike any other in the world. They were right. 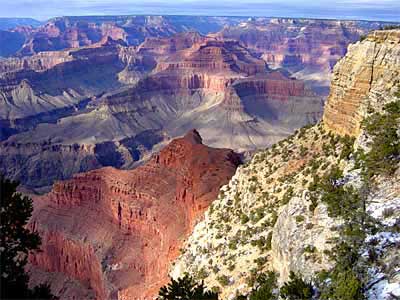 The Grand Canyon North Rim is very remote with few services. It is more ideal for the adventurous visitor. Although the North Rim of the Canyon can be seen from the South Rim and is only 10-15 miles away as an eagle flies, it is about a 5 hour drive to get to the other side. Although more remote, many visitors believe the views are more incredible versus the South Rim. The North Rim is most accessible from southern Utah.

Unlike the South and North Rim, the West Rim of the Grand Canyon is not administered by the National Park Service. The West Rim is owned and operated by The Hualapai Indian Tribe. The Tribe is enlarging its amenities and services to attract a greater number of tourists. It is the home of the "SkyWalk" where tourists can walk out over the canyon with a see-through surface beneath them. It is an amazing experience. The West Rim is closer to Las Vegas than the other two rims and as such enjoys a great number of tours from the Las Vegas area.

Today, a Grand Canyon vacation involves more than peeking over the Canyon’s rim. Tours, river rafting expeditions, hiking, mule rides, and camping are just a sampling of the delights that various rims of the canyon offers.