How Big Is The Grand Canyon? 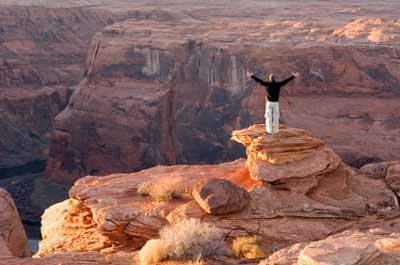 The Grand Canyon is huge and its majesty and beauty is unimaginable. It encompasses 1,218.375 acres which represents 1,904 square miles. The Canyon was carved over a period of millions and millions of years by the Colorado River and therefore most people measure the size of the Grand Canyon by the length of the portion of the Colorado River from the eastern-most to western-most ends of the Canyon which is 277 miles long.

Officially the Canyon begins at the east from Lee's Ferry which is just below Glen Canyon Dam (which forms Lake Powell) and ends at Grand Walsh Cliff at Lake Mead.

Primarily, the Grand Canyon is comprised of the North Rim and the South Rim. The average distance between the two rims is about 10 miles with the greatest distance being about 18 miles and the least at about 5 miles. These distances are as the condor flies and both rims can be seen from either side. There are two ways to get from the South Rim to the North Rim. One way is about a three-day very strenuous hike and the other way is about a 212 mile drive. See the Grand Canyon Map.

Elevation Of The Grand Canyon

A full length rafting trip on the Colorado River through the Canyon begins at Lee's Ferry and the full trip can be accomplished in one week if it is on a motor-powered raft and could take two to three weeks in an oar powered raft. There are partial trips that usually requires a hike into and out of the Canyon.

Hiking To The Bottom Of The Canyon

A one-way descent hike to the bottom of the Canyon can take at least a full day. Hiking back out can take longer because of the steep grade. Hiking from the South Rim to the North Rim can take three days and should not be attempted by the inexperienced hiker, particularly one that is not in very good physical condition.

The above will give you an idea of the vast size of the Grand Canyon. As one of the World's Seven Wonders, its amazing beauty is beyond belief. Pictures of the Grand Canyon do not begin to express the spectacular scenes that reward those that experience the Canyon is person. It's important to point-out that over 90% of tourists visit the South Rim. That's because it is closer to major transportation routes and features more amenities, conveniences, comforts and lodging options. See Grand Canyon Hotels, Flagstaff Hotels and Williams Hotels. Williams, Arizona is about 67 miles from the South Rim and Flagstaff, Arizona is about 85 miles. Also see Flagstaff Bed and Breakfasts.