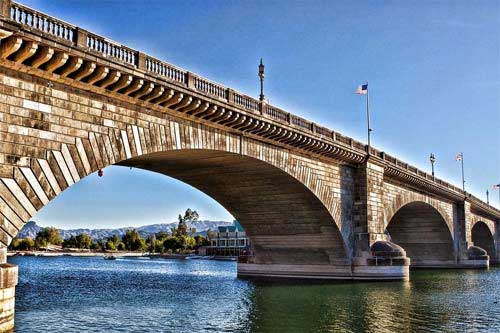 The London Bridge, originally built in 1831 over the River Thames in Londonnow is the same bridge that crosses a Lake Havasu channel to an island in the lake. This old world relic did its job for about 140 years surviving two world wars until it slowly started sinking and was no longer able to handle weight of the traffic.

Its towering walls and archways of granite serves as the backdrop of an English Village that was created around the base of the London Bridge. The Tudor-style buildings and charming British shops created an atmosphere of Medieval England with this world's largest mobile antique. It is 950 feet long and weighs over 30 tons.

The dismantling process was tedious; each stone had to be numbered in order to be properly replaced in Lake Havasu, Arizona. It was shipped to Long Beach, California and then transported by truck to Lake Havasu where it was reassembled with modifications to fit landscape specifics. London Bridge was opened in 1971.

History of the London Bridge