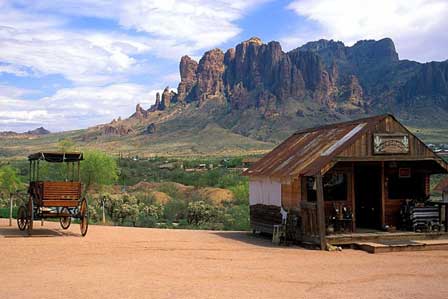 Some of the best scenery in central Arizona can be seen right from a car window along the Apache Trail. A route for the adventurous traveler, the trail is partly paved with a section of the route graded dirt. The road was originally constructed in the 1930s to support the development of dams along the Salt River. The trail is a day-trip from the Phoenix Area and drive is an experience you will never forget. Caution is required when driving and its not recommended for large RV's or caravans; the largest RV rental company in the US does not allow their vehicles do be taken on this route.

Most travelers who venture onto Apache Trail follow a route that starts in Apache Junction then loops through Roosevelt, then south to Globe and back to Apache Junction. Along a loop drive of 80 miles, you will find spectacular scenery to rival any in the state. The unpaved section of the trail provides magnificent views of twisted igneous mountains with dense forests of saguaro and ferocactus with several deep blue lakes along the way. 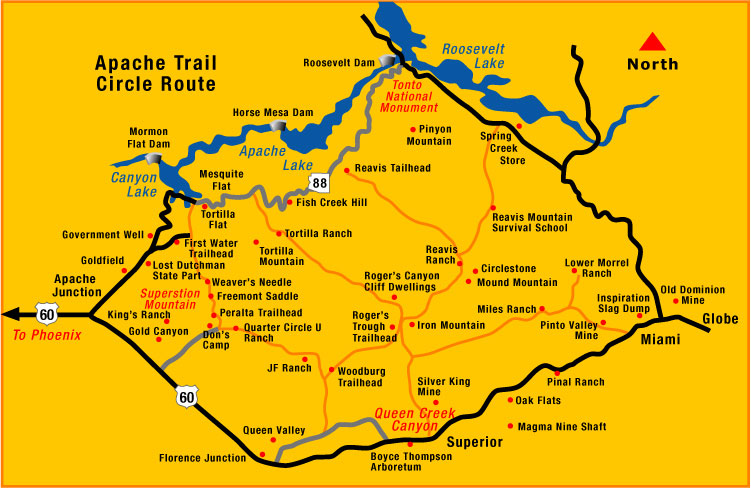 Fish Creek Canyon is perhaps the most awe-inspiring section. The road hangs on the side of this high-walled canyon and winds its way along tremendous precipices that sink sheer for hundreds of feet below.

Attractions Along The Apache Trail

The Lost Dutchman State Park
Located at the base of the Superstition Mountains, the park is an ideal starting point for exploring the mountains. The park offers a variety of hiking trails, nature trails, 35 regular campsites, picnic facilities, and special programs throughout the year.

Goldfield Mining Town
This re-created old west ghost town is complete with a mine tour, shops and dining. Over a hundred years ago the town was a booming gold mine. The Mammoth Mine produced about three million dollars in gold between 1892 and 1896

Canyon Lake
The name of this lake couldn't describe it any better. Steep canyon walls tower over the clear cool water with twisting ravines. This lake is one of four formed by damming the Salt River. Facilities here include dining, a marina, the Dolly Steamboat Cruises, boating, camping, picnicking, and swimming.

Tortilla Flat
The old-west style settlement of Tortilla Flat is an ideal place to stop for lunch. At the old stage stop of Tortilla Flat you'll find giant burgers, cold drinks, and ice cream! There's also an interesting curio shop decorated with mementos from the many visitors who have passed through over the years.

Apache Lake
Formed by Horse Mesa Dam, Apache Lake is long and narrow and is the second largest Salt River Project lake. The Apache Lake Marina and Resort is one mile from the main highway and features a motel, gas station, coffee shop, picnic supplies and a trailer park for 12 units.

Tonto National Monument
This well-preserved Sinagua Indian cliff dwelling looks down on Lake Roosevelt. Visitors are permitted to walk around the inside of this two-story ruin. There is a visitors center and picnic area with lake views. A trail leads to the ruins.