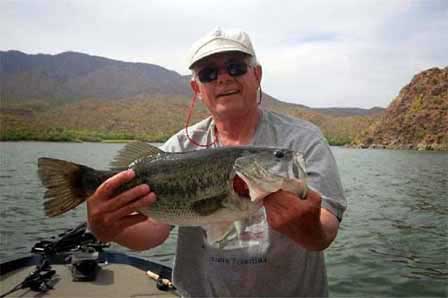 Those that call Arizona all dry are all wet. And it isn't true that if you want to catch a fish in Arizona, you have to go to the grocery store. Well let's set the record straight. Arizona fishing is incredible. It's not just the fishing itself, but the diverse landscape beauty that surrounds the fishing spots as well.

Fish the desert lakes in the spring, fall and winter. During the summer head to the high country where temperatures average 20 to 35 degrees cooler than the desert areas of Phoenix and Scottsdale. Regardless of whether you prefer waters next to steep canyon walls or mountain lakes surrounded by forests of pine, you will discover how great fishing is in all of Arizona.

Lakes in the Phoenix and Scottsdale area are fairly large. with thousands of acres of water surface and average depths exceeding 100 feet. Turn the power boats loose because there are no limits on motor-size. Strap on the water-skis. Go searching for those spots where the trophy-size bass are abundant. Rent a house boat and relax in tranquil solitude. Amenities abound with marinas that provide boat rentals, boating services, general stores, restaurants and even boat tours.

Fishing Lakes in the Phoenix Area

Southern Arizona has few lakes. Lake Patagonia, south of Tucson near Nogales, AZ is the centerpiece of Lake Patagonia State Park. The Central Arizona Lakes of Alamo Lake and Roosevelt feature some of the bass fishing in Arizona. Alamo is located about 80 miles northwest of Phoenix in a rather desolate area. Roosevelt Lake is the third-largest lake in Arizona located about 80 miles northeast of Phoenix.

At an elevation of 7,000 feet, Flagstaff is a pine forested paradise holding several mountain country lakes. Some of these lakes depend upon snow melt and rain runoff to fill them. There could be periods when the lakes are full and times when they become almost dry. Boat restrictions apply. Depending upon the specific lake, fishing varieties can run the gamut from trout, northern pike, bass and other fish species. Most Flagstaff lakes include campgrounds.

Portions of the two largest man made lakes in America are in Northern Arizona. The largest is Lake Mead that sets on the border between Arizona and Nevada. The second largest is Lake Powell setting on the border with Utah. To say these lakes are large is an understatement. As an example, Lake Powell is over 180 miles long with almost 2000 miles of shoreline. Powell feeds the Colorado River as it begins its journey through the Grand Canyon. Both lakes are loaded with Largemouth Bass and Stripper Bass.

Payson AZ is the heart of Mogollon Rim territory where outdoor paradise beckons to be explored. Lakes in Rim Country are those within reasonable driving distance from Payson, AZ. Elevations range from about 5,000 feet to 7,000 feet in heavily forested landscape. Most lakes in the Payson area prohibit gas-motor powered boats. Some back country lakes can only be reached via short hikes. Lakes reward with both trout and some warm-water sport fish with beautiful camping spots.

Lakes in the Payson Arizona Area

Located in the heart of the Prescott National Forest, the Prescott AZ area features 4 beautiful small town fishing lakes. At an elevation over 5,000 feet, you'll discover cool, crisp temperatures and pine forests. Some lakes prohibit gas-powered motors and if they do, non-wake speeds are strictly enforced. The lakes are highlighted with gorgeous scenery, great hiking trails, and campgrounds. Depending upon the specific lake, fish species include bass, trout and other varieties.

Elevations in the Arizona White Mountains range from about 6,000 feet to 10,000 feet which means four distinct seasons with heavy snow periods in winter months. The area is loaded with smaller mountain lakes surrounded by lush forests, many with camping grounds. Most lakes limit boats to low horsepower or electric motors. Some lakes only permit watercraft without motors. The cooler temperatures mean an abundance of trout species, but you will find some bass and typical catfish.

Lakes in the White Mountains

Things To Do In Arizona