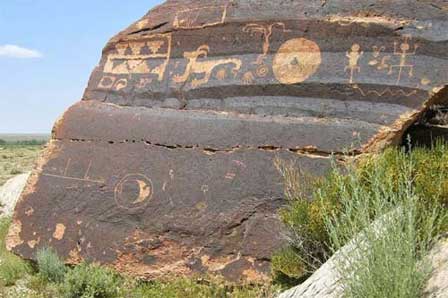 Whispering archeological evidence gives insight into ancient civilizations that once roamed or lived in the Petrified Forest National Park and the Painted Desert over the course of about 13,000 years. Evidence shows that prehistoric cultures of the ancient Anasazi, Mogollon and Hohokam had impact on these lands over varying periods of time. These ancient peoples were not considered as specific Indian Tribes, but are ancestors of some of today's Indian Tribes in the Southwest such as the Hopi, Navajo and Zuni.

Today this land appears so barren and harsh suggesting questions of how people survived in such inhospitable conditions. What did they eat? Did they hunt and if so what type of wildlife existed? Did they farm and if so what foods were grown? What type of shelter did they have and how were they built? What became of the ancient people? 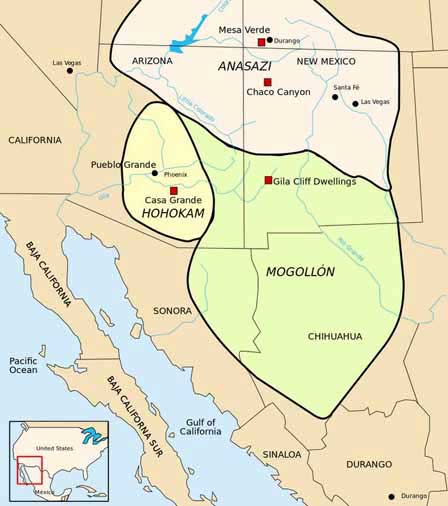 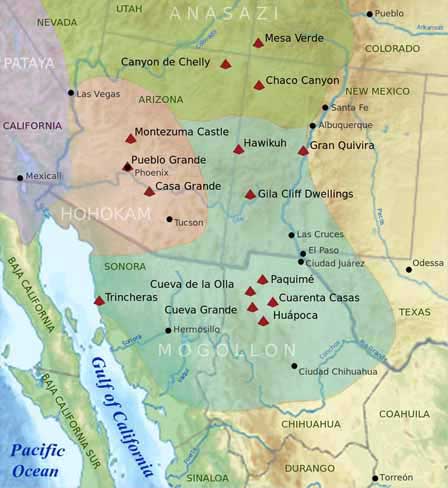 At the end of the last ice-age, the Paleo People roamed the Southwest including the Petrified Forest, Painted Desert and its surrounding area. It was much cooler back then with heavy grasslands and more diverse plant. These nomadic people were hunter-gatherers meaning they gathered wild plants and hunted forms of bison and other large wild animals that are now extinct.

Less is known about the Paleo Indians than future civilizations because fewer of their artifacts have been uncovered. If they left petroglyphs, they either eroded away over the course of thousands of years or remain deeply buried in yet to be discovered archeological sites.

Over this period climate gradually warmed and rainfall diminished. Prior period flora and fauna either gradually became extinct or migrated to other areas. The land become progressively more barren with differing species of plant life and smaller animals. People adapted. Farming and people became less nomadic and began to settle into villages with slightly more advanced sheltering.

Agricultural farming began in this era particularly as corn was brought into the region from the south. Evidence has been unearthed indicating advancement of tool making including flaking tools and metates for grinding corn. No evidence of pottery has been discovered from the Archaic Culture Era.

People became much less nomadic and moved from high mesas down to more fertile farm land. Farming adapted to wider varieties of squash and beans that augment the primary diet of corn. Creation of new tools were broadened and others were improved.

The introduction of basket weaving and simple brown pottery came during this era along with the introduction of the bow and arrow. Most of the petroglyphs which depict humans, animals and other symbols are tied to this period.

During the latter part of this period, climate became closely similar to what it is today. Shelter evolved into multilevel pueblos with subterranean ceremonial rooms called kivas. Farming, cooking and hunting tools continued to advance as did more artistically colorful pottery.

Unearthed artifacts from the era show very similar traits to those found in Flagstaff, Sedona, and Hopi Mesas as well as areas around Gallup, NM and even the Arizona White Mountains area. This would indicate the existence of extensive trade routes and/or heritage commonality with other ancient Indian tribes.

Pueblo people began to aggregate into larger communities often in pueblos with hundreds of rooms. Images on petroglyphs and kiva murals indicate that Kachinas became wide-spread during this 150-year period and pottery became substantially more elaborate.

Similar to the ancient Sinagua Indians that settled farther east, Pueblo people mysteriously disappeared from the Petrified Forest and Painted Desert area by 1450. A sustained drought adversely effecting food supply was likely the reason they left the area. They could also likely joined other ancient tribal communities in more distant areas.

The Indian Tribes of today in Northern Arizona and Western New Mexico including the Navajo, Hopi and Zuni claim the ancient Pueblo Indians are their ancestor predecessors. Most archaeologists and researches agree. The artifact similarity to those discovered in those other tribal lands are substantially similar.

More than 1,000 archeological sites have been identified and studied in both the Petrified Forest and the Painted Desert. Less than half of the National Park has been surveyed so who knows what future discoveries will be uncovered that remain secretly buried under the surface.

How interesting would it be to stand in the quiet solitude of the Petrified Forest National Park and imagine what life must have been like thousands upon thousands of years before? And how would those ancient civilizations react if they could be here today to see what modern life has become?