Arizona, arguably, boasts the most interesting geology in the country. Along with the Grand Canyon and red rocks of Sedona, Meteor Crater, known by scientists as Barringer Crater, is a testament to this statement. Located under forty miles east of Flagstaff, the location is a 50,000 year old crash site formed when a meteorite hit the earth. Travelers visiting this region of the state will want to plan a special trip to view this bit of cosmic history. 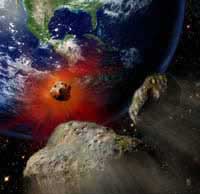 Scientists believe the meteorite's impact was far stronger than the bombs that blasted the Japanese cities of Hiroshima and Nagasaki during World War II; in fact, they say it was 150 times stronger than those explosions. The ancient blast displaced 175,000,000 tons of rock. This was a considerable feat considering that much of the meteorite vaporized during its journey through the planet's atmosphere. Many scientists concur that the size of the meteorite, at impact, weighed about 300,000 tons and sported a diameter of 150 feet.

While the impact on the earth can still be seen in the land, the blast had a serious impact on the flora and fauna of the locale when it hit. Scientists believe that all life forms would have been instantaneously vaporized within a few miles of the blast. Even at seven miles out, life forms would have met with serious burns. However, scientists do not think that the crash played much havoc with the weather or atmosphere to seriously impact a larger area than the immediate locale. Within a century, geologists believe that the flora and fauna would have recovered and reclaimed the area, which was then, an area characterized by both grasslands and woodlands-wetter and colder than it is presently today.

Not surprisingly, Meteor Crater hosts many visitors today. During the sixties, the site was used by NASA astronauts during training sessions. Travelers anxiously clamor into the visitor center to man telescopes and stand at the observation points to enjoy the fine views of the crater. Scientists continue to work in the crater as well, conducting various experiments from time to time. The site continues to be a popular tourist destination.

While popularly called Meteor Crater, the site takes its name from the scientist, Daniel Barringer, who first hypothesized that the crater was, indeed, formed by a meteorite. Other scientists theorized that the crater was formed by ancient volcanic eruptions. When Barringer's theory was finally proven, it was the first known meteorite hit ever given credence by the scientific community. Since then, several other sites have been attributed to meteorite hits. Meteor Crater was named a National Monument in 1967.

Getting To Meteor Crater

Located under forty miles from Flagstaff, Meteor Crater is six miles south of I-40, roughly halfway between the towns of Winslow and Winona, Arizona. Travelers should take Exit 233 (also known as Meteor Crater Road) off I-40 to reach the site. There are many sites denoting the crater as well as other associated attractions like the Museum of Astrology. Visitors should note that there are entry fees to visit the crater. There is also a nearby restaurant and gift shop.

Other Natural Attractions Nearby

In the Flagstaff area, vacationers will discover other interesting natural attractions including Sunset Crater, Walnut Canyon and the Wupatki National Monument of ancient Indian ruins. The Painted Desert and Petrified Forest are located about 95 miles east of Flagstaff along Interstate 40 east of Holbrook Arizona.