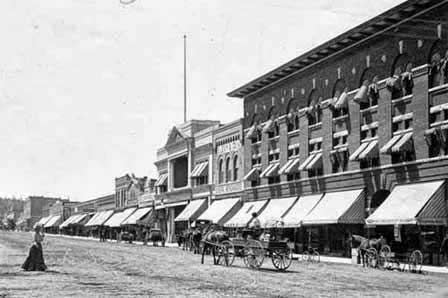 This poem by Gail Gardner sets the original flavor of Whiskey Row.

"Oh they starts her in at the Kaintucky bar,
at the head of Whiskey Row,
and they winds up down by the Depot House,
some 40 drinks below."

A Quick History of Whiskey Row

Prescott was founded in 1864 when gold was discovered in the area. Miners and prospectors came in droves in search of riches. Settlers, cowboys, bawdy girls, gamblers and even some outlaws followed. The settlement grew fast and became the first capital of the Arizona Territory.

The main street in town, Montezuma Street, included about a one block area which was aptly called "Whiskey Row" since 40 saloons saturated just one block. Whiskey Row became the town's center of recreation during the early days of the wild west.

It was hard to imagine 40 saloons crowed into this one block. It was where the men came to drink their whiskey, eat their meals, play poker, visit the brothels above many of the saloons, and get a bit rowdy. It was where wives would go looking for their men-folk.

Prior to 1877, Whiskey Row was rumored to have been located a couple of blocks from today's location. So the story goes, local employers and wives insisted the change because "customers" had to cross the foot bridge over Granite Creek to return home. During heavy rains, the "inebriated" would often fall into the creek and a few even drowned.

Most of the "colorful" stories of Prescott's wild west days are centered upon what typically went on in, around and about Whiskey Row. On active nights miners, cowboys, outlaws, gamblers and town folks stirred up the dust on the dirt street trying to decide which saloon or bawdy spot fit the interest of the evening.

It was a real happening along Montezuma Street when the World's Oldest Rodeo began in 1888. The annual rodeo is still a huge attraction during the entire week beginning just before July 4th. The popular Frontier Days and its parade still takes place in Prescott during the rodeo festivities.

In July of 1900, the entire block of Whiskey Row burned down. Not to be without their old watering-hole and center of recreation, the men wasted no time rebuilding and began reconstruction immediately. It didn't take too long before the hustle of Whiskey Row recovered. 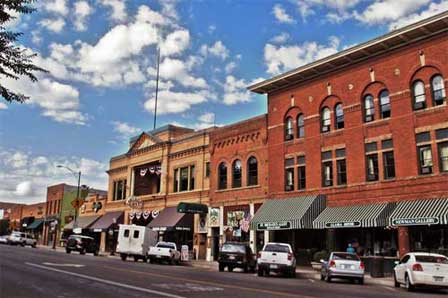 Over the years, Prescott has mellowed. It's a down-home kind of place. The more rowdy days of the old west is now more tranquil. But when the urge strikes, the hustle-bustle of Friday and Saturday nights is still centered on Whiskey Row in historic downtown Prescott, Arizona.

There are no longer 40 saloons, nor poker parlors or bawdy houses, but still enough bars to let your hair-down. The aura of its wilder days is still present, but much more tame with the charm of days past. The natives still still call this town "Preskit".

Most of the old buildings on Whiskey Row are still standing and are on the National Register of Historic Places including "The Palace Saloon" which is the same place that served libations to Doc Holiday and Wyatt Earp who are most famous for their role in the Gunfight at the OK Corral that took place in Old Tombstone, Arizona.

When visiting Prescott, make sure you save time to visit historic downtown and its Whiskey Row. You'll discover fine dining, bar and grills, art galleries, boutique shopping, and antique shops. Whiskey Row also hosts most of the annual celebrations held in Prescott including Frontier Days, Oktoberfest, its Christmas Parade and Courthouse Tree Lighting Ceremony as well as many other events.

In The Pines Around Prescott