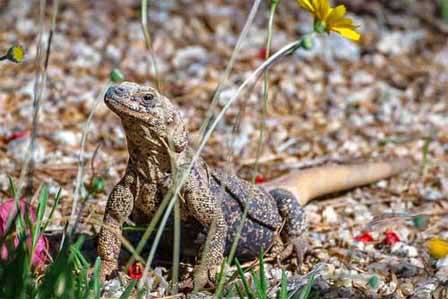 The Chuckwalla looks scary and ferocious. Much like a dragon carryover from the dinosaur periods. But it is completely harmless. In fact it is primarily a vegetarian with a main diet of fruits, flowers, and other plant life although it will occasionally dine on a pesky insect. The Chuckwalla is native to the Southwest desert regions, particularly in Arizona.

Interestingly, Arizona is home to the two largest lizards in the US. The Chuckwalla, which can reach a length of about 18", is the second largest lizard behind the Gila Monster. But unlike the Gila, the Chuckwalla is not venomous and not dangerous to humans. It is very docile and runs to nearby rock piles when it feels threatened.

Characteristics of The Chuckwalla 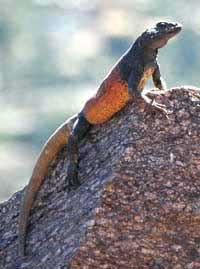 Often called a "Desert Iguana", Chuckwallas are distinguished by its wide, flat mid-sections and have a prominent paunchy belly. Their tails are thick and taper to a blunt tip. They have loose folds of skin around the neck and sides of the body. An adult male reaches an average total length of 16 to 18 inches and weighs about 2 pounds. The female and junior Chuckwalla are noticeably smaller than the male.

The male has more colorization than the female. They have a black head, forelegs and upper trunk with either a reddish-yellow or bright red body while the female is grayish brown with little pattern. Young Chuckwallas are distinguished by a dark background color with yellow bands around the body extending to its tail.

There are several species of Chuckwallas that primarily inhabit the Southwestern states and Northern Mexico. The Common Chuckwalla lives in the deserts of the southwest, primarily in Arizona. They are unique to the Arizona Sonoran Desert and the Mohave Desert in California. They can also found at the Grand Canyon, the Lake Powell area and desert areas along the Colorado River.

They are most often seen near rock piles, canyon walls and outcroppings which gives them quick access to cracks and crevices when threatened. The Chuckwalla can actually inflate itself until it is tightly and securely wedged in those crevices. It protects them from its primary predators which include coyotes, bobcats and birds of prey.

The Chuckwalla emerges early in the morning and will bask in the sun until it reaches a body temperature of 100-105 degrees Fahrenheit at which time it seeks food. It's always observant of danger and remains in close proximity to rocks and boulders. Mating takes place in spring and she lays 5-16 eggs during the summer. Eggs are buried in a nest excavated in moist soil. Hatchlings emerge in September.

They will hibernate during the winter months and typically emerge in mid-to-late February. The lifespan of the Chuckwalla is about 15 to 25 years. Large males can become territorial particularly around abundant food sources with largest male being dominate. Dominance hierarchy is established by youth and size.

More Information About The Chuckwalla