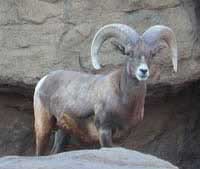 These are amazingly agile, sure-footed animals that with little available footing can climb steep rock face canyon walls. Their unique padded hooves helps them climb rocky terrain with speed. This climbing ability combined with impressive eyesight helps them detect and escape predators that include mountain lions and bobcats.

Desert Bighorn Sheep are a subspecies of the North American Bighorn Sheep and at one time in the mid-1800s, the combined estimated population was over 2 million. Today their combined numbers have declined significantly to about 25,000 of which about 4,000 are the Desert Bighorn subspecies and most of those inhabit the Mojave and Sonoran Deserts in California and Arizona respectively.

The Desert Bighorn are about the size of a mule deer with rams (males) weighing from 150 to 200 pounds and ewes (females) weighing much less at 75 to 130 pounds. Both rams and ewes develop horns soon after birth that continue to grow for a lifetime. Rams develop horns that curl in a spiraling shape that can measure more than a foot in circumference at the base. Annual growth rings on the horns indicate the animals age. The female's horns are much smaller and do not tend to curl. Both sexes use their horns as tools such as breaking open cactus for consumption. The rams also use their horns defending against predators and fighting other rams to establish male dominance and the right to mate with territory ewes.

It is interesting to note that the core of the horns have honeycombed chambers that reduces the overall weight while maintaining strength and durability. 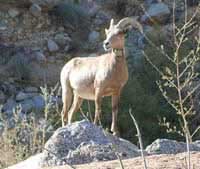 Bighorns band in separate groups of females and males and only gather together during breeding season which is usually between July and October. Gestation lasts about six months with lambs typically being born in late winter. Newborn lambs weigh about 8 to 10 pounds and are active within minutes of birth. It is rare for a ewe to give birth to multiple lambs and a lamb will stay with its mother for about two years before joining its respective herd. Life expectancy of the Bighorn is 10 to 12 years with some bighorns reaching 17 and even older.

The preferred habitat of the Desert Bighorn is near steep slopes in desert mountain ranges and rocky cliffs above foothills where they have a clear view of surrounding territory. One of the most populous habitats is in the Black Mountains between Kingman, Arizona and Las Vegas, Nevada. They are often visible on the rocky ledges in and around Hoover Dam.