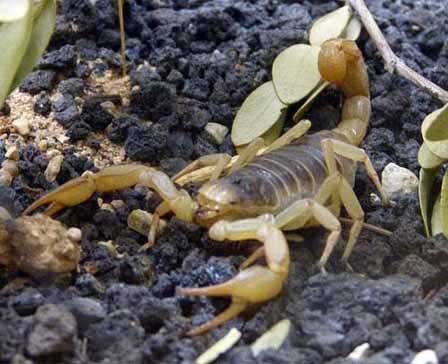 "You can't stay up all night!" I told my husband, who insisted on going to bed with a large flashlight, sitting upright and frantically patrolling the walls for any sign of scorpions.

"Oh, don't worry," he said, looking at me expectantly, "I'm just taking the first shift... " I knew then that my poor boy from Long Island had a lot to learn about the desert.

Only a half-hour earlier, while brushing our teeth, we found a bark scorpion wandering along the edge of our tile floor. Minutes later we saw another one scurry across the foyer, and it was then that Kevin, mild-mannered by nature, started to panic.

It had been two weeks since we moved into our new desert community home and only days before, someone at a social gathering had warned us about the number of scorpions we could expect to find due to construction in their habitat. He told us a horror story about a young couple who actually moved back east after finding dozens of scorpions crawling all over their house and trying to climb into the baby's crib. Based on his B-movie description, it actually made a bit of sense, the flashlight and all, but I took a deep breath and reminded Kevin of the facts.

Scorpions haven't changed much over the past 350 million years. Like spiders, they belong to the class Arachnida and have eight legs. They are nocturnal creatures, hiding in dark places during the day and spending the nighttime hours hunting for insects, spiders and even other scorpions. Because they can't produce their own body heat, they are dormant during winter months when overnight temperatures fall below 77 degrees Fahrenheit. And practically blind, they use tiny hair follicles on their legs for sensory input. Thus, with the promise of warmth and the curse of bad eyesight, the two scorpions we found that November evening had obviously made an innocent turn and ended up in our house.

There are somewhere between 70 and 90 species of scorpion in the US, many native to the desert southwest. We most commonly see two types: the giant hairy, North America's largest specimen, 4-6" long and intimidating but relatively harmless; and the tan bark scorpion, which is only 2-3".

Despite humans and scorpions living in such close proximity, nobody in Arizona has died from a sting in over 40 years. Still, bark scorpions remain notorious as the most toxic scorpion in the entire country and deliver neurotoxins in their venom that can intensely affect the nervous system. And while it's true that a sting from a bark scorpion can potentially be lethal, it must be said that most people suffer mild, if somewhat disturbing symptoms and are feeling back to normal in less than a day.

I have been stung twice and experienced local pain and sensitivity with no swelling at the sight. I also developed trouble swallowing (a "lump" in my throat), random eye movements (called nystagmas), and a restless feeling. Some other symptoms are numbness in the face (a child often rubs their face because it feels weird), slurred speech or drooling. Respiratory paralysis is life threatening and the most critical symptom of bark scorpion venom, so any difficulty breathing must be treated immediately. To care for someone who has been stung, wash the area with soap and water. You can use a cool compress to relieve the burning, but don't apply ice. Questions should be directed to Poison Control or your physician. In recent years, the ASU Antivenin Program developed an extremely effective treatment which can be used to control extreme reactions in children under ten, elderly patients and people with weakened immune systems.

As for pets, the symptoms are the same. Because they are at greater risk for complications due to their size (all else equal, less body weight = stronger reaction), if you know your pet has been stung, always seek medical attention. Since they cannot describe what they are feeling, you should look for drooling or frothing at the mouth, abnormal eye movements, tension in the body and labored breathing. Many veterinarians do not stock scorpion antivenin and only some of the emergency animal hospitals have it on-hand all the time, so call ahead if possible.

Although scorpions will sting in self-defense, they are generally not considered aggressive. It's important to understand the appropriate level of danger to keep fear in check. Remember, their stinger has the express purpose of spearing food, similar to our use of a fork. If a person was threatened and all they had was a fork, they could jab that fork, and might even injure an attacker. But forks are made for eating not stabbing - someone would have to be very frightened for their safety to start wielding their dining utensil!

As it turned out, we did take a lot of scorpions out of our house that first year, 26 to be exact, but not one of them caused any problems. (Scorpions can be easily relocated with a glass container and a strip of thin cardboard and it's true that they cannot climb glass.) Since then, the number of scorpions seen each season has dropped dramatically to one or two. Nowadays, Kevin is the one explaining the facts and helping ease the minds of freaked out friends with uninvited house guests. He even finds a bit of humor in their irrational phobia. And that's pretty good for a guy who sat up all night with his flashlight not so very long ago.