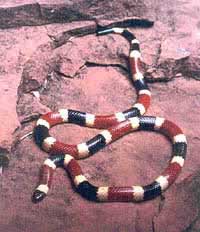 Also known as the "western coral". The brightly colored coral snake is venomous and has a scary reputation, but is not as dangerous to humans as a rattlesnake. The coral is related to the cobra and ounce-for-ounce, its venom is twice as potent as that of the Mohave Rattlesnake, considered the most venomous of rattlesnake species. However, there has never been a recorded human death from the bite of a coral snake.

Although its venom is deadly potent, the Arizona Coral has a poor poison delivery system. It has a small mouth with small fangs that can hardly break human skin. It carries little venom and would have to hang-on and sustain a bite for a duration to inject enough venom to do serious harm. At about 13 to 20 inches long as an adult, it is a small snake. It is highly secretive, nocturnal and is not an aggressive snake. It will always avoid human contact.

Bites by a coral snake are very rare and most reported bites are the result of people trying to handle the snake. Being small and brightly colored, people are tempted to handle the "cute critter" to get a closer look. That would be a big mistake. If you are bitten, seek immediate medical help. The effects of the venomous toxin can have delayed reaction. As a "neurotoxin", it can cause slurred speech and double vision and if enough venom is injected, it is possible to cause serious respiratory consequences.

Characteristics of the Coral Snake

The adult coral snake is small. Its average length is 13 to 20 inches long and has brightly colored bands of black, red and yellow that encircle the body of the coral. The Scarlet King Snake, with very similar banded color is often mistaken as a coral snake. The king snake is not venomous and poses no danger to people. At an average adult length of 48 to 72 inches long, the king snake is much longer than the venomous coral.

Here's a good way to identify the coral other than size. The coral's red bands that encircle its body touch the yellow bands that also encircle its body. It has a blunt nose and its head is completely black. However, it is never wise to handle a snake unless you are absolutely sure it is not venomous. Observing wildlife is a privilege, but never harass or do harm to any wildlife.

As described above, Arizona Coral Snakes are small, shy and reclusive. Although there are exceptions, most bites only occur when the snake is handled. Coral snakes hunt by night and prefer a diet of smaller ground snakes and lizards. Their venom acts quickly upon these smaller cold-blooded creatures causing fast paralysis and respiratory failure. Coral snakes typically lay two to three eggs by the end of summer. After approximately ten weeks, the young snakes hatch.

Western coral snakes live in Arizona's and northern Mexico's Sonoran Desert. They are often found in rocky locales where Saguaro cacti are present. They prefer the cool microcosm of life under rocks where they are not likely to encounter much company. They may even bury themselves in sand or soil. Because they are nocturnal creatures, they are seldom seen in the wild. If they are seen during daylight, it is usually during overcast days or after daytime rain.