Graceful, sleek and timid, the Pronghorn Antelope is unique to the prairies of North America and exist no where else in the world. Before the arrival of European settlers, Pronghorns once numbered in the millions and were found in grassland plains west of the Mississippii River to the Rocky Mountains region extending north to Canada and south to Mexico. As settlements grew, the antelope population dwindled to near extinction. With conservation methods implemented, the Pronghorn made a come back.

The Pronghorn Antelope is considered the second-fasted land mammal in the world second only to the Cheetah. Although a Cheetah can exceed the Pronghorn's top speed of about 60 miles per hour, it can't match the speed endurance of the Pronghorn which can sustain speeds of 30 to 40 miles an hour over extended distances. The tremendous speed of the antelope is a defense against its predators which includes coyotes and bobcats.

The have exceptionally keen eyesight with 320 degree peripheral vision and can detect danger from up to four miles away.

The habitat of the Arizona Pronghorn Antelope are prairies and grasslands and are most abundant in the North Central plains of the state. Herds are often seen just north of Prescott Valley and those that travel on Interstate 17 can frequently see herds in the wild between Cordes Junction and the edges of Camp Verde, Arizona. They also inhabit the high elevation meadows between forested areas in East Central areas of Arizona. There is a sub-species of "Sonoran Pronghorn" that are on the endangered list that exist in small numbers in the desert areas of Southwestern Arizona. Antelope are grazing animals primarily feeding on grasses, weeds, cactus and small Juniper Pine.

The running gait of the Antelope is beautifully smooth and its powerful legs can handle rough terrain. Although it can run at high speeds, antelope are reluctant to jump over objects and prefer to crawl under fences.

Pronghorns have "binocular-type" eyesight and can detect movement from miles away. When alarmed, their hair stands erect and appears as a white flash that can be seen for miles. An interesting fact about the Pronghorn is their hair is hollow and can be erected at will which is one reason that they can adjust to temperature changes. They shed continuously because individual hairs are loosely attached. This trait makes their hide rather useless as rugs.

Adult males can weigh between 90 to 120 pounds with females about 20 pounds lighter. Wild antelope generally have a life span of 6 to 8 years.

Antelope are usually observed in mixed herds most of the year and led by the dominate buck males. During the spring months, bucks are often alone or in small groups. During the fall, bucks gather harems of females that can number up to about 15 does. The male buck will aggressively defend his harem from other bucks.

They breed in August and September and fawns are born during May and June after about an eight month gestation period. Typically, females give birth to one or two fawns with most occurrences being twins. Their weight at birth is about 5-6 pounds. Interestingly, antelope fawns are not born spotted like deer, but have the colorization of adults. Newborn fawns have no odor which is their main defense against predators like bobcats, coyotes and eagles. The fawns remain hidden usually in tall grass or brush with the doe feeding them several times a day until they are strong enough to travel with the adults. 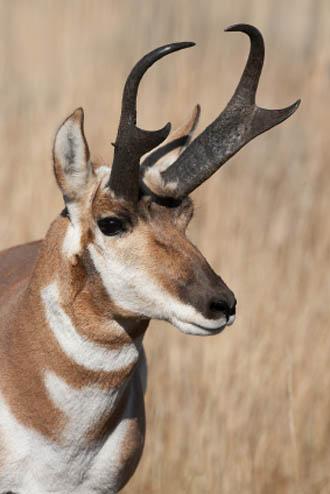 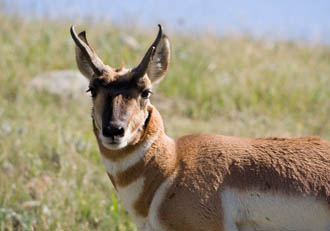 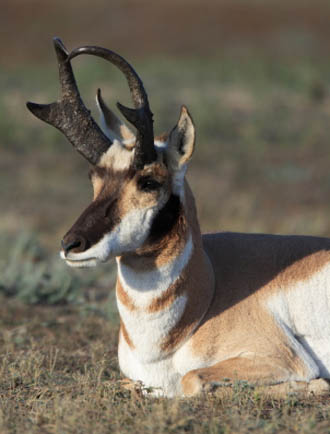 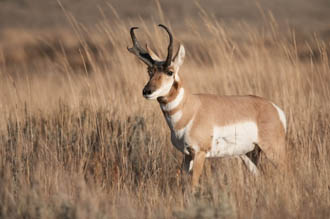 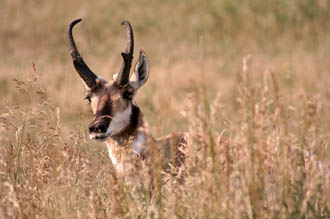