My Pet Desert Tarantula, My Princess Was Really A Prince 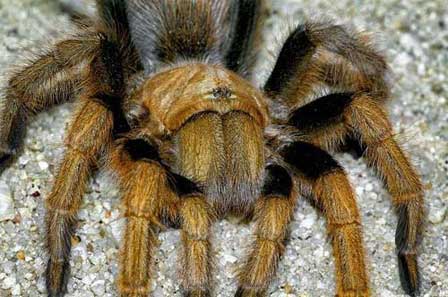 Arachnophobes Anonymous. The fear of spiders is a powerful thing. I was arachnophobic for 30 years, long enough to be good at it (after all, a sound, well-rooted neurosis requires time to seep into every ounce of one's being to be considered at all respectable). Like many people, I grew up loving "normal" animals - the kind that kept their leg count under eight - and ultimately I went on to work with animals professionally.

Through the years, I managed my little spider problem nicely until fate forced my hand. I accepted a position at the zoo as the on-camera naturalist where my duties would include making local and national television appearances with animals. I was very excited about the job until, as I perused the list of species I could be called on to handle, my eyes came to a screeching halt on the most frightening word in an arachniphobe's vocabulary. Tarantula.

Tarantulas belong to the family Theraphasidae, and an estimated 800 species are making humans shriek around the globe, namely in tropical, semi-tropical and desert regions. Generally considered enormous, as spiders go, adult tarantulas vary significantly in size, from about 8-25 cm - the largest being able to span a dinner plate. They are capable afoot and formidable fangs offer substantial head-on protection. Plus, New World tarantulas (those in the Americas) have additional defense equipment in the form of urticating hairs on the top of their abdomens. These tiny barbed setae can be flicked loose with the tarantula's hind feet, irritating intruders' eyes and skin. Details like these seemed reasonable grounds for an aversion to mammoth spiders, but one undeniable fact remained: I needed to be able to hold one and look ok about it.

There was no time to waste. I simply couldn't bare my colleagues thinking of me as a wimp. I needed a private, accelerated program to overcome my mental illness and free me from fear's wicked grip, so I made a bold decision and bought a pet tarantula (the common desert species native to Arizona, scientifically called Chalcote ) and named her Princess.

Once I got Princess home, I had a bit of difficulty transferring her into her new glass enclosure, decorated nicely, I might add, with a bed of microwaved peat moss, and I agonized for several hours more before I cautiously stuck my hand in to touch her. Luckily, she was very calm and didn't seem bothered by my advances.

Eventually, I was holding her - weeks later even enjoying it. I admit that sometimes I had to grit my teeth when the heebie-jeebies threatened to get the best of me, knowing even a short fall can break the outer surface of a spider's body called the exoskeleton and prove fatal. But amazingly, over time, Princess' gentle nature and absolutely fascinating behavior captured my interest. and my heart, spurring me to become even better educated about tarantulas.

Like all spiders, a tarantula has two main body parts: the cephlothorax (cephlo=head, thorax=body) and the bulbous back section called the abdomen. Its heart, digestive and reproductive systems labor internally, along with book lungs and silk glands that secrete liquid strands of webbing through delicate spinnerets on the arachnid's hind end. Looking closely, a tarantula also sports two retractable claws per foot that aid it in climbing, as well as traction on the ground. It's true that tarantulas are venomous, although not deadly to mankind, and many species are docile and good-natured, exercising their prowess simply to catch prey, which in the wild consists of insects, lizards and sometimes birds or small animals.

For several years, I handled Princess on and off camera and she became a true ambassador for her species. At educational programs, she walked on the hands of dozens of anxious, open-minded children (and a few gutsy parents, some of whom I'm sure I heard mumbling, "Find a happy place...") and I watched her ballerina charm work wonders!

Then one summer, Princess went into her burrow for her annual molt, the process of shedding her exoskeleton in order to grow. The next day, I was astonished to open the cage and find a thin black male with long legs and mating spurs. "Prince". Yes indeed, as it turned out - she was a he .

Female chalcotes live 20-30 years, so we expected to have Princess a long time, but males live only about nine years. A young male looks identical to a female until he undergoes his final molt and reveals his sexually mature body. His new, sleek design marks his death sentence as he is given a matter of months to complete his final mission - to seek out willing females and mate before dying.

Denial cushioned my brain until, at summer's end, I found Prince dead, his legs curled in, no longer held outstretched by the fervent pumping of his heart. My sweet spider had slipped away and as I picked up his limp body, I found my heart breaking in the same way I had felt it break for the other wonderful pets that I had to say good-bye to. It's not easy to face death, but I never expected to feel such sadness at the passing of a spider.

I like spiders now and I am grateful to have come so far. The mind is a big place with lots of room for crazy thoughts about little things... like spiders.

Hi, my name is Brooke and I'm a recovered arachniphobe.

AUTHOR'S NOTE: Despite my positive experience, I strongly discourage the keeping of tarantulas as pets. They are extremely fragile and require the owner to have abundant knowledge to thrive. They can also deliver a severe bite and offer a fraction of the joy and interaction that a dog or cat can provide.