Then A Silent Thank You 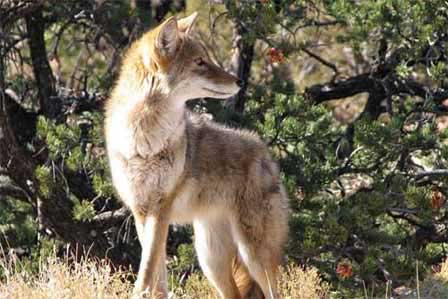 When I first saw him through the darkness, I felt the nagging thoughts of everyday life slip shamefully away into the night. He was a small coyote, young and beautiful, hit by a car and thrown to the side of a busy road. A call from some anonymous driver brought me there, and as a trained wildlife rescue volunteer, I prayed my skill and focus be precise. I exited my SUV and approached him, kneeling slowly. A sudden rush of sympathy clenched my insides and I had to take a deep breath to center myself. His stare pierced the green of my eyes and penetrated my very essence, and I wondered when he looked into me. did he see hope?

Working there alone in the grassy ditch, trying to stabilize my new patient, I thought of all the sick, injured and orphaned animals that are carried to local rehabilitation centers each year: hawks, bobcats, owls, javelina - such extraordinary wildlife. Many, like that little coyote, are so badly injured, it seems their Humpty Dumpty bodies have no chance of being repaired. And it's true that some of those needy beings slip through our grasp as we work helplessly in the face of death. For them the journey, while painful, is short. It is the animals that survive who need courage.

I spread a thick red blanket in the back of my truck and gently positioned his delicate frame for the ride. When we arrived at the animal hospital, the veterinary team was ready for us with a table of supplies. I helped the doctor start fluids and wrap bandages and miraculously, that little coyote kept breathing.

Later he underwent surgery to repair his broken bones - with so much damage, I feared he might not be releasable. But as time stretched weeks into months, he regained his strength and to my amazement, eventually made a full recovery. Now, today, he is scheduled to go back to the wild and I am stout with joy.

It's only a short drive to the release site. The coyote rustles inside the carrier. His amber eyes flash with both fear and confidence. There's such satisfaction in seeing an animal you've cared for rejoin the natural world; the expression in their eyes when they realize they're free, watching them stretch their legs toward a fenceless horizon or spread their wings in a clear, expansive sky. It's a thrill like no other. That's why I'm here - to witness this coyote's burst to freedom, the same coyote I watched taunt death on the roadside. And for me, the celebration is so sweet and strong that the air is dense with it.

When the time is right, we open the carrier and he sprints toward the bushes. Then suddenly, reaching a safe distance, he stops and looks back, staring for just a moment - a treasured moment, a silent thank you - before dashing into the landscape.

Does all the effort to save a single animal make a difference? For that animal, for me, yes. Most sincerely, yes.