The Havasupai Indian Tribe, also referred to as the "Havasu 'Baaja" have lived in the canyon area just east of the Grand Canyon South Rim for over 1,000 years. Havasupai means "people of the blue-green waters" after the color of the water that flows from the Havasu Springs through Havasu Creek as it makes its way to a series of four gorgeous waterfalls of which "Havasu Falls" is the most notable.

The Havasupai have been the traditional guardians of the Grand Canyon. Prior to the early 1800s before the Grand Canyon was proclaimed as a National Park, the Tribe roamed a vast area on the upper plateau. During the Fall and Winter months, tribal members would move families up to the plateaus subsisting on hunting and gathering what the earth provided. They would then move back down into the canyon and planted crops during the Spring and Summer months.

A Quick History of the Reservation 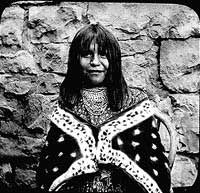 In 1882, the US government confined the Tribe to a reservation of only 518 acres at the bottom of the canyon forcing the Havasupai to lose over 90% of its aboriginal land. This adversely effecting the economic base of the Tribe forcing it to rely mostly on farming at the canyon's bottom and led many Tribal members to seek wage labor jobs outside the canyon.

Eventually, as much of the world discovered the oasis beauty of the Havasu Falls and its other waterfalls of Navajo, Mooney and Beaver, the Tribe began to rely on tourism as many hikers were attracted to the allure of the falls and beauty of the canyons. In 1975, Congress reallocated 185,000 acres back to the Havasupai restoring hunting grounds back to the Tribe.

Recorded members of the Tribe numbers about 650 making it one of the smallest Indian Tribes in the nation. About 450 members live at Supai Village at the base of Havasu Canyon and nearly all of the Supai residents work for the Tribe in the tourist industry. Supai Village has a general store, a lodge for tourists and a restaurant. It is also home to the Tribal Government, a church and an elementary school. Children are schooled 11 months per year and upon completion of 8th grade studies, they are typically sent to government sponsored boarding high schools. Most of them return to Supai upon high school graduation.

The Tribe is governed by a seven member Tribal Council which is elected by the Tribal members. The Bureau of Indian Affairs provides law enforcement to Supai Village. The Havasupai do not receive any US government stipends and pay income taxes like all Americans. An Indian Health Service clinic and a resident physician provides out-patient and emergency services. Possession of alcohol, drugs and firearms on the reservation is illegal.

Tourism is helping the tribe's living standards, although it is difficult. This is due to the fact that there are only a few ways in and out of the community. Traveling down to Havasu Falls can only be done by foot, horse or helicopter. Still, more than 12,000 visitors come to see the amazing high waterfalls. This land is sometimes called the "Shangri-la of the Grand Canyon" because of its towering cliffs, spectacular waterfalls and calming pools of water.

The Havasupai speak a form of Yuman, which was derived from Hokan languages. These languages use prefixes, suffixes and compound words to form longer words made up of several elements. A complete sentence or phrase may be expressed by one word. They believe in a Supreme Being and some have accepted Christianity, but many still cling to ancient traditions and prayers. The Havasupai draw their strength and spiritual direction from their land which they consider scared.

The women of the tribe are still practicing basket weaving, using cottonwood and willow coils. Basket and other ther native crafts are sold on the reservation and surrounding areas.

Visitors are asked to preserve the magnificence of the Havasupai homeland and respect their natural resources which contribute to their spiritual direction. All visitors are asked to leave their liquor, drugs, weapons and pets at home and to take their trash out of the canyon when they leave.