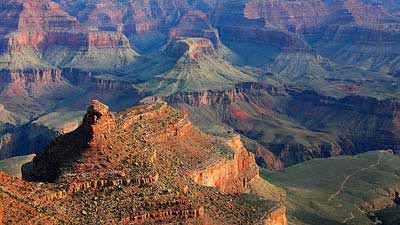 As sunrise begins to unveil the magnificence of the Grand Canyon every morning, every day of the year, a group of forty to fifty Canyon visitors gathers around the mule ride check-in desk in the lobby of the historic Bright Angel Lodge. The old lobby is the picture of comfort and security with its rustic beam construction and fire roaring in the huge rock fireplace. But the smiles and cheerful banter of this group mask the anxieties which lie beneath. They are about to embark on an adventure that only a fortunate few people in the world will ever experience.

Probably never having been to the Grand Canyon, they made their reservations over a year ago and have patiently enjoyed the anticipation ever since. However, having arrived early this morning and made their way out to the patio behind the lodge which overlooks the Canyon, reality has just set in. Big time! On the other side of the short, rock retaining wall the Canyon begins - and it goes straight down. The sheer magnitude of the Grand Canyon couldn't possibly have been grasped through the pictures they admired at home. Even now, as they stand beside it, they are struggling to grasp the reality of it. Everyone is awestruck and some even suffer a degree of shock. It would be easy to conclude that only an experienced parachutist could safely make that descent.

They are checked in now, and have been issued their rain slicker (Canyon weather is fickle) and their bota bag for water (a souvenir of the trip), and have made their way a quarter mile along the Canyon rim to the round, rock corral next to the trail head. While the anticipation remains as high as ever, for most, the anxiety level drops slightly when they get their first look at Ron Clayton and his wranglers. Even though they resemble a picture out of the old wild west, they are for real. One look at Casey, Dave, Jack, Sean, or any of the seven or eight others (including several equally competent lady wranglers) will rightfully calm their nerves. These are some of the best cowboys in the world. They love what they do, they do it well, and they instill trust at first sight.

As Ron gathers the riders around for instructions, a crowd of other tourists gather also, out of curiosity. Unexpectedly, both the riders and the spectators are treated to a first class monologue with twenty minutes of instructions and education woven into a humorous presentation which further calms a few jitters. He stresses safety and reassures them that if they simply obey their wrangler, all will be well. He also assures them that if they don't obey their wrangler, they will quickly become hikers. Every single soul standing in that crowd believes him. The riders are now ready to go.

A sharper trail boss doesn't exist than Ron Clayton. With an eye gained only from a lifetime of experience, he looks the riders over as they walk toward him into the center of the corral, one at a time. As they approach him, he calls out the name of one of the sixty mules tied up around the corral perimeter, a mule which will inevitably turn out to be a perfect fit for that rider. Ron is that good. After each group of eight to ten riders has mounted and been given last minute reminders by their wrangler, they follow the wrangler through the corral gate. Fifteen feet farther and they are at the Bright Angel Trailhead and over the edge they go.

It is rumored, and it is true, that the first quarter mile of the descent is the scariest. Anxiety is at its peak now, as many of the riders have never been in a saddle in their life. The trail is narrow, and the vertical drop-off along the edge of the trail is frightening to say the least. The first turn in the trail is almost a u-turn and, forgetting that a mule's head is some distance in front of its front legs, they may feel like their mule is going to go straight over. Never fear. In spite of their apparent nonchalance, these mules don't miss anything, and the very last thing they want to do is go over the edge. The turn will be successful, an audible exhale can sometimes be heard, and a tiny bit more anxiety will subside.

A short fifteen minutes down the trail they will come to a wide spot which, by now, looks as safe as the plains of Kansas. The wrangler will stop and all the other mules will automatically line up beside him, facing the Canyon. He will remind everyone to put on their "parking brake" and then he will dismount and begin a rider to rider equipment check, tightening cinches, checking stirrups, etc. All the while, he will once again be stressing the most important rule of safety - keep your animal up close to the one in front of you! The mules make this trip every day and they are so comfortable on the trail that they will sometimes lose focus and lag behind. If not reminded by the rider's use of a "motivator" to stay close, at some point the mule will realize his sin on his own, and will run to catch up. While it is somewhat humorous to watch a wide-eyed rookie rider bouncing up and down on the back of a mule cantering down the narrow and rocky trail, hanging on for dear life, this is how accidents happen. So the riders are reminded once again that repeat offenses of this nature will surely turn them into a hiker.

It is here also that any rider who has already become totally convinced that death is just around the next corner, can dismount, leave their mule where it stands, keep their bota bag, and hike the short distance back out of the Canyon to enjoy a longer life. Only pure terror can be the basis for this decision, however, and it rarely happens. The trail below looks much less ominous and most of them will already be visibly more relaxed. The adventure which they have dreamed about has just been vividly previewed and the lure to continue is almost undeniable. The wrangler mounts up and the ride of their life resumes.

It is impossible to describe the sensations which they will experience for the next two hours as the trail drops some three thousand feet in altitude, and no attempt to do so will be made by this writer. This aspect of the "once in a lifetime experience" is different for every rider. Some will later recall the breathtaking vistas as the trail winds around the Canyon walls and occasionally yields glimpses of the vast valley below. Others will recall "interesting" parts of the trail itself. Perhaps Jacob's Ladder, the seemingly endless series of swithcbacks which scale what appears to be a thousand foot vertical rock wall. Entering the Indian Garden oasis with its hundred year old cottonwood trees shading the quaint atmosphere will also be a memorable occurence for some, not just for its serene beauty, but also because they are more than ready to get out of the saddle for a rest.

A camaraderie will develop among the riders even though they are from different parts of the world and just met one another in the mule corral. Without fail, they will be party to humorous incidents along the trail. They will all laugh more today than they ever thought possible. Some will quickly develop a bond with the animal they are riding - talking to it and calling it by name. In fact, the most lasting memory for some will be the animal they rode. They will always remember its name.

Upon arriving at Indian Garden, they will welcome the chance to dismount and stretch. Some will now be noticing the first signs of soreness in a place where they are not accustomed to feeling it. Others will just be happy for the opportunity to walk around and straighten their legs. If it is summertime, the wrangler will line all the riders up and hose them down - no exceptions - with cool water piped across the Canyon from Roaring Springs over on the Canyon's north wall, and it turns out to be fun for everyone. Mid-day temperatures in the Canyon can be extremely high and the symptoms of overheating are sometimes difficult to recognize. The wrangler will once again check everyone's tack, and they are off to Plateau Point. By now, a few of them will even fancy themselves real cowboys.

The trail out to Plateau Point is flat and uneventful, giving no hint of the spectacular view they are approaching. Even as they are dismounting at the pipe hitching rail they are still largely unsuspecting. Only when they clamber up on the huge flat rock and make their way out to the pipe rail at the far edge, do they get their first view of the Colorado River peacefully wandering along the Canyon floor. It is still so far below that it resembles a piece of blue string lying on the ground. A brief reverential silence usually occurs, and then the exclamations begin. This will be what some will always recall first. It is breathtaking for sure. One last look, a few thoughts and comments about the beauty and power of mother nature, and they mount up and head back to Indian Garden for lunch. Everyone is always ready for lunch.

They were all given sack lunches when they checked in at the lodge this morning. A light lunch, but tasty. There won't be any complaints as they relax on a short rock wall, munching away, discussing the natural wonder they have become a part of for one memorable day in their life. They will all be feeling some level of physical discomfort by now, and when the wrangler says "OK riders, let's hose off once more and mount up", most of them will be thinking they would rather sit right where they are just a little longer.

The trip back up the Canyon wall will be quieter and probably uneventful. It has been a long day and they will be tired by now. With their backs to the valley, they will trudge up and out of this mystical world and back to the civilization to which they are accustomed. When the wrangler announces a rest stop for the animals, they will sit quietly and gaze back down into the Canyon. Their comments will be predictable - "It's just gorgeous" or "I'm so glad we made this trip" or "We were all the way down there?!". Whatever the comments, the appreciation in their voices is clear.

As they dismount for the final time, back on top in the corral where it all started, their mood will be somber and appreciative. They will be glad to get out of the saddle for the last time, but subdued by the realization that the adventure has ended. They will express their appreciation to their wrangler with uncommon respect and they will remember his name forever. They will return to their homes with memories which will never be dislodged, and in some cases, never even diminished. They understand full well that they were privileged to experience the ride of their life.

As sunrise begins to unveil the magnificence of the Grand Canyon the next morning........